SiteGround VS HostGator – Who Is The Better Host For Your Website?

One would think that when two titans battle it would be a close match, but in reviews, many variables are matched and the results might end up a little surprising. SiteGround and HostGator are two well-established members of the web hosting community and both have paid their dues as well. Yet even as they battle it out, keep in mind that each company might have its own niche areas they specialize in. Keep an open mind don't be surprised at some of the results.

SiteGround and HostGator are two of the bigger names in web hosting today. With so many reviews out there, it might still be a little daunting to make that step forward and really choose your future host. We understand that, and to help you out a little more, let’s take things further and let these two slug it out.

Bear in mind that it’s very easy to take the features and specifications of each and pit them against the other. Instead, what we’re going to do is bring forward key areas in which even a tiny little difference matters.

Through the review, do keep in mind that what we’re looking out for is not simply performance, but also the hosting providers general attitude towards doing business as well as how it approaches and handles customers.

Overall, we will be looking specifically at;

All test sites used in this review are owned and administered by Bitcatcha, except for ShiphraShepherds.com.

Started within a mere two years of each other, SiteGround and HostGator both have long histories to back up their play. With about 15 years in the industry each, these two giants have grown and developed a portfolio of products that stretch from shared hosting all the way to enterprise-scale offerings.

HostGator’s history is not as clean as SiteGround’s however, as it was bought over by Endurance International Group (NASDAQ: EIGI) in 2012. This was following a hacker group’s attack on HostGator’s billing software provider’s database. As a result, user information and 500,000 customer credit cards, website files, and cPanel configuration records were leaked.

Unfortunately, following the acquisition, EIG would go on to face several critical incidents of server outages across 2013. For a hosting provider, this is something lethal and that has put HostGator off to a poor start. We understand that some things may simply not be the provider’s fault, but even so – it happened.

While every hosting provider will no doubt offer hosting plans that build on their own strengths, let’s consider two main categories of hosting plans; Shared and Cloud hosting. These are the primary ones that most site owners would be interested in.

For Cloud, both servers did relatively well and kept below Google’s 200 ms recommended speeds for server speed response. Due to data centre location, speeds on the US continent remained good before dropping off slightly the further east we test from.

For shared hosting, SiteGround’s shared test site is in Singapore while unfortunately HostGator only hosts from North America. This shows slightly in speed tests, given that SiteGround’s offers a better worldwide average speed of 159 ms compared to HostGator’s 190 ms.

It is my guess that the primary reason for this is likely to be the Supercacher and software that SiteGround employs. These are all designed and optimized for even distribution of data delivery irrespective of distance from data centre.

Let’s look at their server information for awhile

In terms of configuration, SiteGround and HostGator take different approaches. To keep it simple, SiteGround intentionally keeps server loads low so that any potential surges in use are manageable. HostGator on the other hand invests heavily in equipment to ensure stability.

Considering that, we’re willing to give a point to both, since HostGator manages to edge out SiteGround in Cloud Hosting, whereas Siteground wins in shared hosting:

But benchmarks aren’t always accurate, so let’s look at the price points that these two hosts have come up with;

Uptime Guarantee – Can they keep it up?

For awhile now I’ve had both these hosts on our radar and have been collecting uptime information on them. This is one area in which both perform eyebrow-raisingly well and this should not be discounted. With that in mind, let’s dig in a little deeper and see what their Terms of Service (ToS) say:

“SiteGround’s reliable hosting service is backed up by an industry-leading Service Level Agreement (SLA). We guarantee network uptime 99.9% of the time during a twelve-month period, starting on the date you order your account. If we fall below that, we will notify you by email and we will automatically compensate your account as follows:

“The Terms of Service, Section 15, contains accurate and updated information regarding HostGator’s Uptime Guarantee in its entirety. This article only seeks to help explain the rules to which you agree.

However, if you look carefully enough at these two sets of quotes, you’ll notice a stark difference. Yes, uptime is mentioned and guaranteed, but whereas SiteGround is explicit in stating it will compensate for exceeding stated downtimes, HostGator has tried to be slimier about the matter. It tries to get away with what I like to call the ‘meaningless guarantee’.

This means that it’s simply putting it there for show, since the company reserves the right not to compensate a customer, without even stating any reason why. Logically, it could simply deny all attempts to claim compensation for downtime. Shame on you HostGator!

Is SiteGround or HostGator priced better?

For Cloud hosting, SiteGround’s plans are much more expensive across the board. However, what they offer reflects the true spirit of a Cloud Hosting environment, rather just the snippets that HostGator is offering with each plan.

I’d say that SiteGround’s Cloud Hosting plans are for the business customers while HostGator is targeting individuals who are looking to try out the Cloud experience. Also, SiteGround’s much higher prices are reflective of true fully-managed Cloud Hosting accounts.

To pit these two would be comparing apples and oranges. While SiteGround is offering fully managed Cloud hosting options, HostGator’s Cloud offerings are more of an amped-up shared hosting type of deal, and that shows in the prices.

For shared hosting, while there is a difference in terms of pricing, both hosts are well within the budged web host range. This is good for the consumer in a way, since there are many options you can choose from depending on your exact requirements. 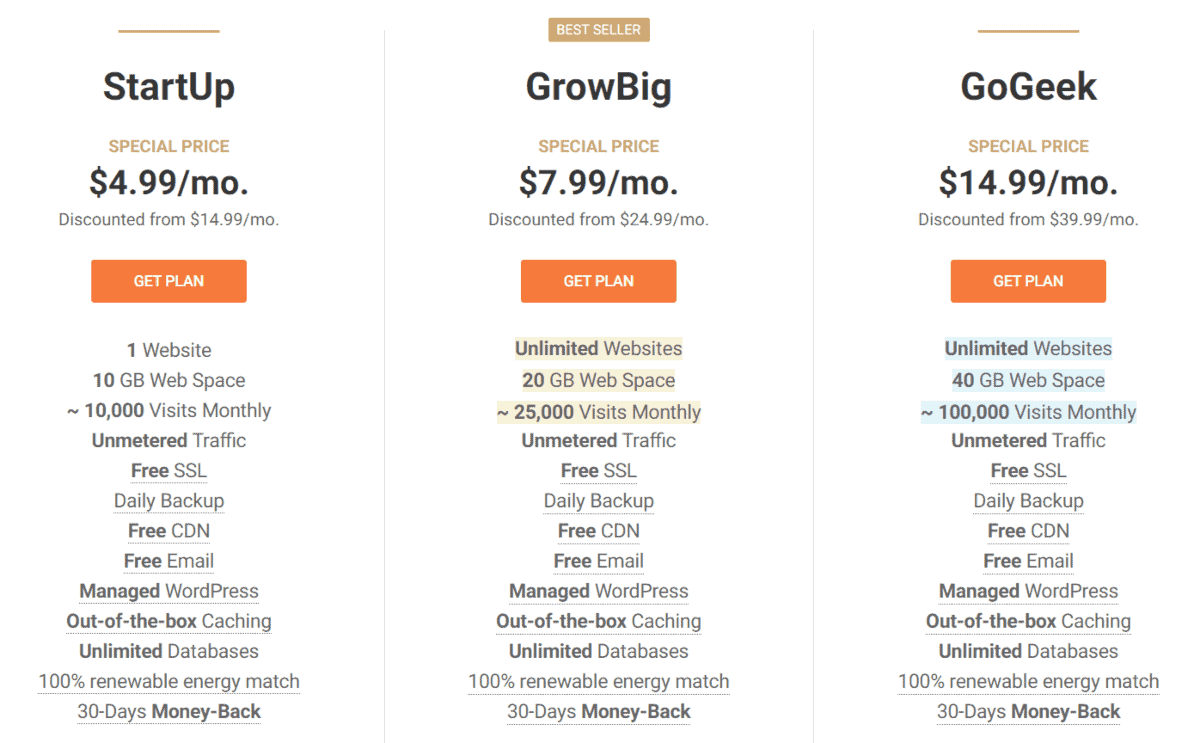 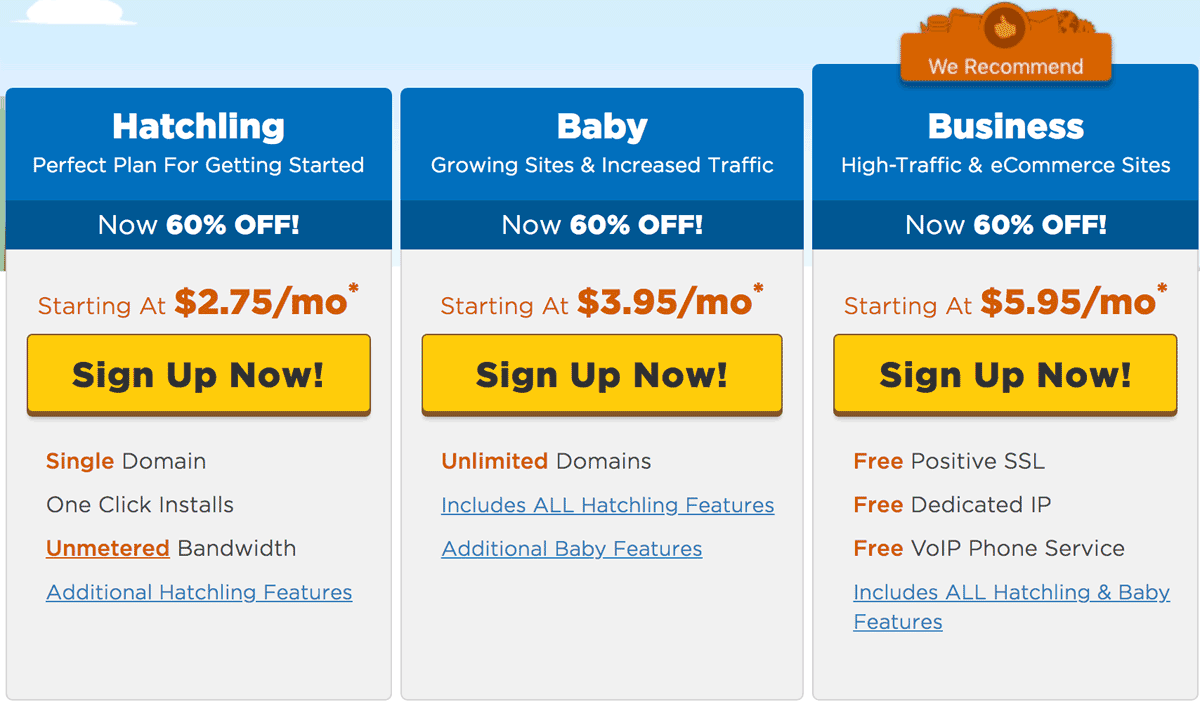 While every hosting provider has some form or other of technical support, what they offer and how well they do so is a critical factor. In this case, both our hosts offer a strong array of support options which include phone and Live Chat.

“Hate waiting for the next available agent? So do we.

We overstaff all shifts so that there is always someone to pick up the phone or online chat, so you don’t have to wait more than a few seconds for the next available operator. We also evaluate each employee’s speed, as well as the team performance as a whole, on a regular basis.”

Besides hosting related issue, SiteGround also support wide variety of web issues (like plugins and extensions) as claimed in the following video:

HostGator on the other hand simply arrays all support options onto a single page, easy to access. However, EIG, the current owner of HostGator has often had scathing complaints about its customer support overall. In fact, even their own staff complains about the company’s attitude when it comes to customer support:

“This is a good company to work for if you like soul-crushing work. Don’t care about actual customers? This is the job for you. Cool with nebulous titles, changing job descriptions and no one that knows what’s going on? Apply today!” (Source)

We really must go with SiteGround for this one:

With that, we come to the final tally score of 6:3. To be honest, before I wrote this review, I was under the impression that it would be a closer fight. I guess the devil is always in the detail and some things that are normally overlooks, come out when in focus.

This does not mean however, that HostGator is a bad host, but perhaps an ultimate selection could be based on your exact needs.

Nonetheless, kudos to the team at SiteGround, we congratulate them on successfully running this gauntlet and applaud their efforts at running an honest, performance-driven business.