NordVPN is a frighteningly strong contender. It pushes all the right buttons in key areas of security, privacy and speed yet offers it all at hard-to-beat long term subscription prices. A definite must-buy for anyone interested in securing their privacy! Learn more.

NordVPN is another behemoth in the VPN business and is based out of Panama. Starting out in 2012, the company has come a long way in a very short time. As of 2018, it manages more than 5,000 servers based across 59 countries.

NordVPN is headquartered in Panama, which although not usually important for most service providers, is significant for VPN services. Panama has no data retention laws and their government does not (as far as we know) carry out Internet surveillance. This means that legally, NordVPN does not need to retain logs of its users’ activities – great for your privacy!

In addition to their great location for privacy NordVPN also uses boasts superior encryption standards. Like all top-tier VPN service providers around, they use 256-bit Advanced Encryption Standard (AES).

Wait – there’s more – To further protect your privacy, NordVPN makes use of PGP keys in customer contact and to protect your account details. PGP keys can be used to encrypt communications between you and NordVPN and are practically unbreakable.

Kill-switch: They have two different kinds of kill-switches: a user can now choose whether to close a particular app or completely terminate the Internet connection in case of unexpected dropout (system-wide kill-switch).

There are two version of NordVPN’s Kill Switch used, depending on your platform. The Windows or Mac version allows you to choose what apps stop communicating if something happens, while the mobile app version stops everything.

All of this serves to prevent data leakage.

As always when testing a VPN, aside from installation and speed tests one of the most important things is to make sure that your real IP is masked. After all, that’s one of the primary purposes, right? Standard tests can be conducted at dnsleak.com or dnsleaktest.com.

All you need to do is compare your real IP with the ones shown on those two sites – as long as they don’t match, you’re fine. 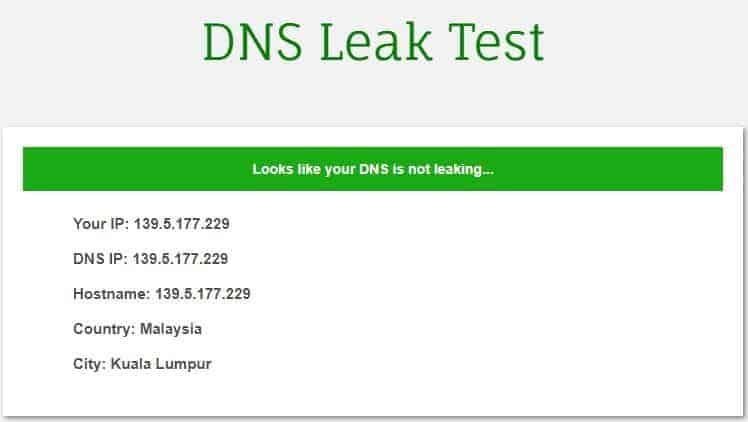 *I’m in Malaysia, so my NordVPN client is obviously working fine!

3. Double the Protection with Double VPN

By now you’ll be familiar with the basic concepts of VPNs, so let’s talk about something additional the NordVPN comes with and that’s Double VPN. By linking together two VPN servers, you’re essentially getting an additional layer of protection.

Your computer/device first connects to one VPN server, which then connects to a second VPN server before finally getting to your desired destination. This way, your destination IP goes through two changes and your data gets encrypted twice as well. Like I said, double the protection!

4. Connect 6 Devices on Many Platform Types

For most of us, we can expect to be using a VPN on a few devices at a time. At the very least on one computer and a mobile device. Then there are those who are device-crazy and have a computer, laptop, two smartphones, two tablets and goodness knows what else.

NordVPN caters for all and it supports up to six simultaneous connections at a time per account. This means you can secure all your devices individually and throw it on your router for good measure.

A good number of platform types are supported, so whatever you have it’s likely to be fine. The only exception is when it comes to routers as those are more finicky.

Not all routers support VPNs. Please check if yours supports NordVPN together with your Internet connection before purchasing the service. Otherwise check out our best wireless router for VPN.

5. Fast & Stable Speeds All Around

I tried out five different geographic locations and while I did notice the usual increasing ping time the further away I got from my physical locations, overall speeds were very impressive. My tests were conducted on a 500 Mbps line from which I regularly get above 450 Mbps throughput.

Performance to various locations of course ranged widely since distance also factors in. When testing a VPN though, there are even more variables in play such as server load, quality of the servers in a particular country, and other factors as well.

NordVPN has so far always surpassed our expectations in terms of speed performance. In the five core regions that I tested them for, speeds were generally high and there was little to no additional latency while using NordVPN.

YouTube streaming for 2k and 4k HD was fine as well, with again the was also smooth and painless. I was able to stream 4k videos without any problems at all. However, do note that there are some areas with weak speeds.

For example, I happened to test their use locally where I am, and speeds to a server here were pretty weak. If that happens to you, just connect somewhere else nearby – ideally a location known for strong infrastructure. 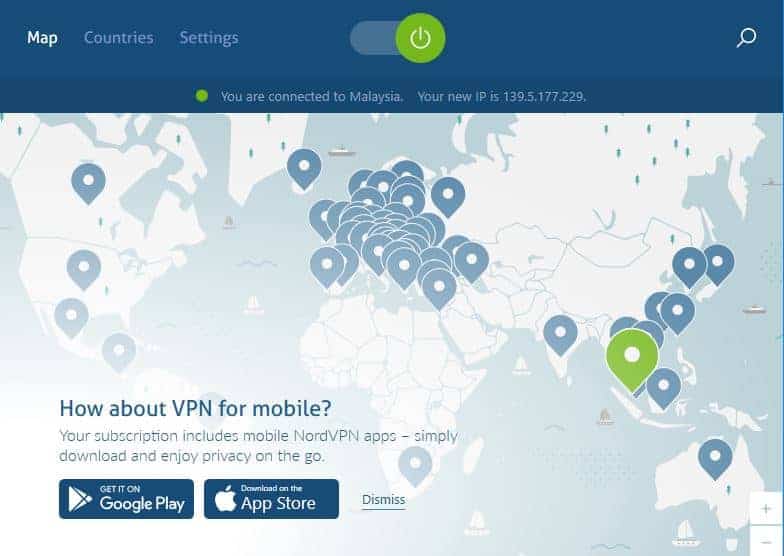 With over 5,000 servers in 59 countries, there’s no doubt that NordVPN is one of the larger VPN service providers out there today. With any network as massive as this, there are bound to be some locations that will underperform compared to others.

However, as you can see in our earlier speed tests, most of the core areas in strategic global locations were fine. If you do connect to a server that doesn’t perform as you feel it should, I am certain there is a better alternative nearby. Just see which one works best for you

Almost a full half of NordVPN’s servers are US-based, followed closely by a similar number of Europe-based servers. Still, for geo-locked content that’s where most of the good stuff is, plus with that many servers, Asia still does well.

* Is your location covered? Check now.
(Back To Top)

Having just investigated ExpressVPN which goes for $6.67 at its cheapest, I was stunned at NordVPN’s crazy (3-year plan had been discontinued) $4.99 per-month 2-year contract plan. At the same tiers from one-month to one-year durations the two are almost priced the same, but NordVPN’s 2-year plan is simply astounding value for money.

Think of it this way – they have a 30-day money-back guarantee and offers dirt cheap pricing for longer-term plans – that makes perfect consumer sense. Looking at their one-year plan, the price comes up to a total of $83.88. If you can top it up by just $12 more and go for two years, why not?

Unfortunately, there is just a tiny ‘but’ here – NordVPN also charges Value Added Tax (VAT), depending on which country you’re from. Not all of you will be charged VAT but some may end up with an additional charge of up to 20% (from what I’ve seen). 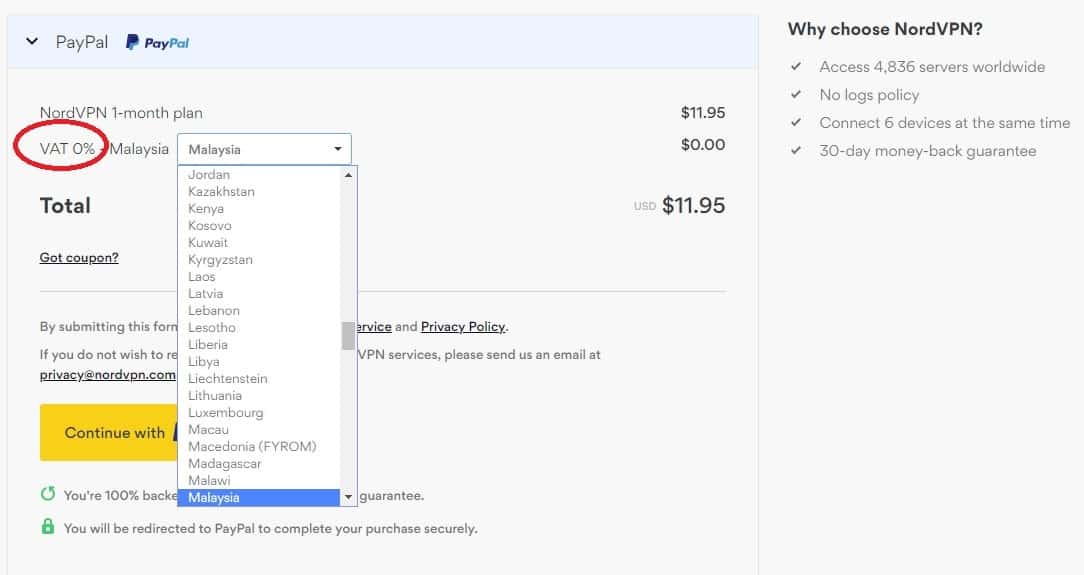 8. Cryptocurrencies and CASH Accepted as Payment

For VPN’s I’m not interested so much if they accept payment by cheque, credit card or bank draft even, but I am impressed that aside from cryptocurrency, NordVPN accepts cash payments in some locations. If you’re living in the US, you can pay by cash at Fry’s Electronics or Micro Center.

These two methods of payment are important because they are untraceable. After all, your privacy is why you’re looking for a VPN provider, right?

The thing about Netflix is that it seems to hate users who use VPNs to try and get around regional content restrictions. The company tries to block VPN users and NordVPN realises this and works constantly to help its users access Netflix content.

In fact, it maintains and entire page that has instructions on how you can access regional content. The instructions change from time to time, so if you find that you’re having Netflix issues while using NordVPN, then remember to check that page!

* Unlock all contents & access them while traveling
(Back To Top)

1. Torrenting Only Supported on Some Servers

At first, Torrenting was a bit of an enigma with NordVPN. Then I recalled that not all their servers supported peer-to-peer file sharing. The settings for this were found under “Auto-connect at startup” where you can choose to have a selection made automatically or choose a specific type of server to connect to.

For NordVPN, these are categorized into Dedicated, DoubleVPN, Onion Over VPN or P2P. While not exactly user friendly, I find that this allows a much greater flexibility in control.

*If you don’t choose a P2P server, chances are your torrents will flatline – like this

While I’m happy that NordVPN does support torrenting, it can be quite disappointing to be limited to only certain servers if you’re a torrenting fan. I also noticed that Torrent speeds were not really as good as I was expecting, based on the speed tests I conducted.

I had to add this part in as a con as well since I was shocked at how badly NordVPN’s Malaysia server performed in speed tests. Just to be clear, I tried the Malaysian server across three different days and multiple times a day – the speeds NordVPN connects to here are simply awful. I consistently encountered appalling 3 to 11Mpbs speeds, which are simply unacceptable.

If you’re using a client app such as the one NordVPN has for Windows, there’s one thing you’ll have to take note of which is that it takes awhile to hook up to a server. I ran a stopwatch on the Windows client (I’m running Windows 10 on a solid-state drive) and it takes on average 14-30 seconds to establish a connection. This is not including the time the client takes to load.

Now to some people, this might not seem like a lot. But if you’re like me and used to SSD-speed loading times then you might understand. Or think of it this way if you’re on a standard hard drive – that 14-30 seconds is how much longer your computer will take to fully boot up as compared to what you’re facing now.

I think the only exception to all of this is if you’re going to be running NordVPN off your router, in which case it will be ‘always on’.

If you prefer to use OpenVPN rather than L2TP or some other protocol, you might be in for a little shock. First, you’ll need to download a ZIP file of NordVPN’s servers, which contains the configuration file for each of their servers. Each server has two configurations – one for TCP and one for UDP. 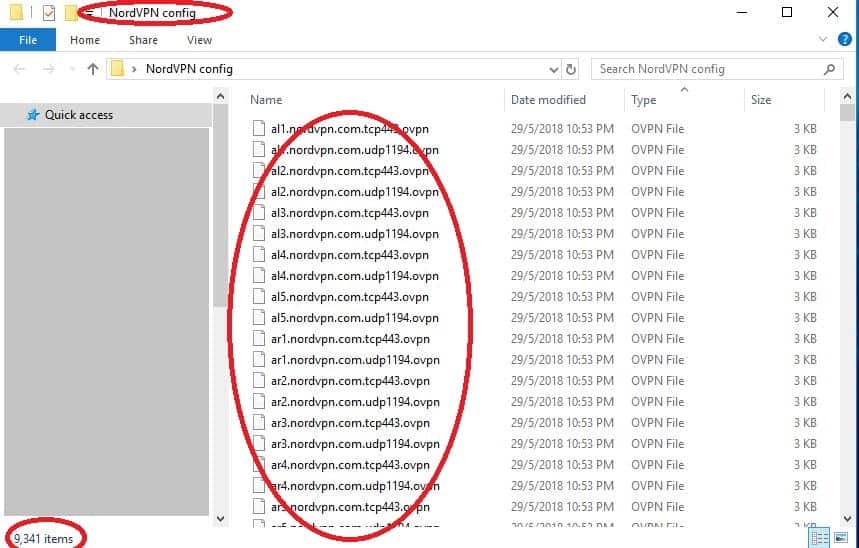 Seriously, this is one of the most ridiculous methods that NordVPN could have thought of to distribute OpenVPN configurations and is a massive pain in the neck.

The Bottomline: Will I Pay for NordVPN?

In one word – absolutely! On a personal basis, when looking for a VPN provider it’s likely that I am after the same things all of you are – privacy, security and speed. NordVPN does remarkably well in all these key areas.

I was supremely impressed with server speeds which in fact really did much better than I was expecting of any VPN service provider. True, there are some let-downs such as the Malaysia server speeds were a let-down, but that’s one country out of 62, after all.

The icing on the cake is NordVPN’s 2-year deal for $3.49 a month, which from what I see is nearly unbeatable in terms of value for money. Even if someone offers a lower price, I doubt they are doing it at the service levels NordVPN is offering.

Will I pay for this? Absolutely.