Bitcatcha's content is reader-supported. When you purchase through links on our site, we may earn an affiliate commission. Learn more
Home>The 7 Best VPN Services in 2021 – Tested For Speed, Security, and Features!>TorGuard Review

TorGuard is a tiny bit different from most VPN offerings since it was designed specifically for P2P file sharing users. It is also flexible enough to offer a variety of options aside from the usual packages – ranging from dedicated IPs to adding on more devices per account. Learn more.

TorGuard VPN is perhaps a slightly more obscure name on our list of VPNs, but that is by no means an indicator of its real value. It is, however, one of the newer brands and was started only in 2012.

Despite a rocky start thanks to roadblocks put in their way by payment companies like PayPal, TorGuard grew rapidly and today offers its clients access to the Internet through over 3,000 servers across more than 50 countries.

TorGuard is a Nevis, West Indies based VPN service provider. For users of the service, this is a good thing due to a combination of two factors. Firstly, TorGuard has stated plainly for all to thee that it has a strict no-logging policy.

Due to more impending VPN blockades, tighter restrictions, and governmental threats due to a China government crackdown on VPN service providers in the country, TorGuard VPN has this year decided to remove all its mainland China servers

The company offers security through OpenVPN which itself supports many types of encryption. The rule of thumb however is that as encryption levels increase, speed tends to suffer a little. The options are there for you to choose what’s best for your own use.

Encryption options range from none all the way to AES-256 bit. Normally the higher the encryption level is, the higher the impact on your connection speed will be. With a range of options, you can balance your need for speed versus security at various times.

1.1. Kill Switch Can be App-specific

Unlike some VPN service providers which offer generic kill switches, TorGuard’s kill switch is a little different. Located as an option in the app, this kill switch offers you the ability to terminate specific processes in case of a VPN connection compromise.

Even though its VPN service already offers various encryption protocols, TorGuard still recommends that you take things a step further if you want greater security.

One such method would be to route applications through a proxy. This could be SOCKS5, SSL or even a HTTP proxy – other services also available through TorGuard.

The final step the company recommends is to make use of a VPN router. Although technically this would mean all your traffic through that router would be encrypted, you can opt for double protection by connecting to the proxy or VPN through the VPN router.

Running a VPN service on your router will help you overcome the simultaneous device connection limit that most VPNs will impose. However, there IS a drawback. In almost all cases (especially for general home-use routers), doing so will slow your Internet traffic compared to if you were to run device-specific VPN apps. This is because routers are less capable of handling the data encryption needed in real-time, thus slowing your data transmission speeds.

2. Deployable on All Major Platforms

TorGuard offers apps for desktop and mobile platforms, deplorable across Microsoft, Apple and Linux devices. However, aside from that you can also install it on your router. Although the company promotes TorGuard pre-flashed VPN routers, you can set it up on most modern routers.

There might be limitations based on exactly which router you might have, TorGuard does offer a knowledge-base that accommodates manual setup for multiple devices. There are many which are supported, but just double check their knowledge base in case if you’re interested.

If you happen to be running a custom firmware such as Tomato or DD-WRT, even better as the company has prepared router setup tools for you.

Although VPNs can help make your internet activity anonymous, many companies (and even some governments) have been trying to overcome this to more effectively block VPN usage. The reason they can do this is because VPN traffic often has certain characteristics – for example, the header that comes with SSL/TLS encryption.

To help overcome this issue, TorGuard has what it calls ‘stealth mode’ (the actual feature in the Windows client is called ‘sTunnel’) which strips that information out and then attempts to reroute traffic through other more usual ports. Because of that, TorGuard has been known to overcome geolocation restrictions better than others.

* Bypass DPI Firewalls and VPN Blocks
(Back To Top)

Before you read on with this section, please note that my current broadband speed is limited to a theoretical 500 Mbps, out of which I generally can get 400 to 450 Mbps depending on which servers I am connecting to.

When I first used TorGuard, their speeds were pretty decent but over time I find that it seems to have dropped a little. I noted more congestion on many servers which could be a contributing factor to this.

Before we look at the test results, here’s a baseline test to demonstrate the speeds I can get to a local server with no VPN active;

With that, let’s take a look at how TorGuard performs from five strategic locations spread across the globe;

TorGuard does not have servers on the Africa continent, so I substituted a Middle East region server for this test.

As you can see, in some cases TorGuard held relatively healthy results but fell flat in others. The surprising thing is that this has not always been the case and I can only hope that it is a temporary hiccup until they realise they need to upgrade their servers again.

Starting at $9.99 per month for monthly payments, TorGuard is relatively cheaply priced in its performance and feature range. Their payment plans see you paying less the longer a plan you sign up for. Right now, their best deal is an annual payment of $59.99, which translates into around barely $5 per month.

While this may not be in the dirt-cheap range, personally I feel that it’s a reasonable balance. Rather than forcing users to sign up for ridiculously long periods of time at rock-bottom prices, TorGuard offers something that sits in the middle.

While I am a fan of rock-bottom prices, there’s very little chance you’ll get me to commit to a three-year contract for anything.

Aside from that, TorGuard also has other offers that you can choose when signing up. These range from static IP addresses (some even at specific locations) and you can even increase the number of devices on your account – for a fee, of course. 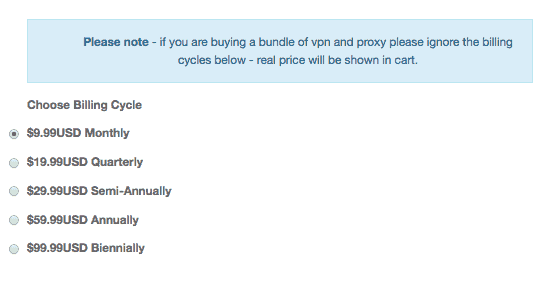 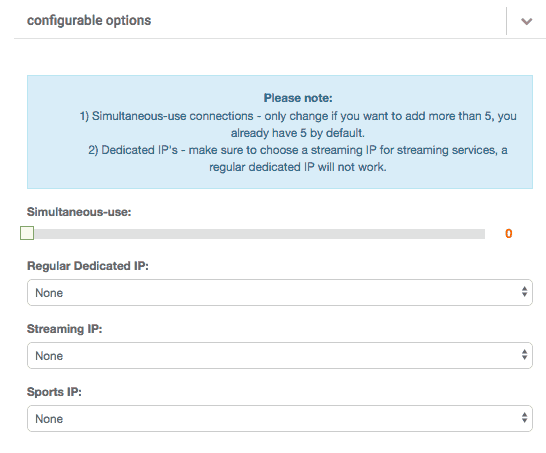 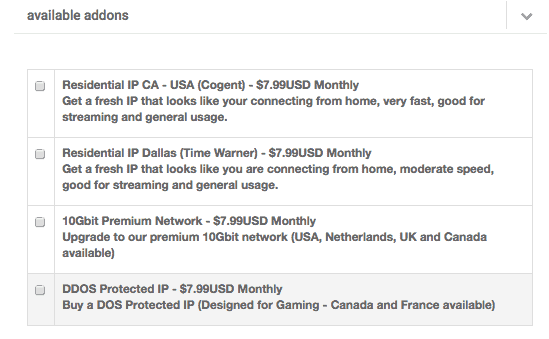 But where TorGuard REALLY shines though is in its payment options. I have -never- seen a service provider have so many payment options available before. It’s true that many are now beginning to accept cryptocurrency, and these guys don’t just go the route of Bitcoin.

From what I see, their payment options include Litecoin, Blackcoin, and 22 other types of cryptocurrency. That’s in addition to the usual credit cards, PayPal, Payment Wall and even gift card options.

While this is often difficult to prove, when TorGuard first started up they had issues working with payment providers due to their open claim to be built with P2P file sharers in mind. Many companies associate this with software piracy and other copyright violations and were leery of being associated with them.

In fact, PayPal suspended their account at first because of this, allegedly leading to TorGuard having around $2,500 in funds frozen. It was eventually sorted out, but not before there was much scrutiny on the legalities of PayPal having done this.

Today, TorGuard accepts many form of payments safely, and are still very much P2P focussed, so Torrent in peace!

Trustworthiness is an essential quality when searching for a utorrent VPN provider. TorGuard is completely upfront about our terms and welcome customers with any of our VPN service packages to torrent, stream, and download to their heart’s content at no extra charge.

Due to a recent bad experience I had with another service provider, I simply had to test TorGuard’s customer service. Rather than submitting a support ticket, I went directly to their customer agent on the main page of their website and tried there.

To my surprise, not only was there a response within a minute, but their front-line staff was able to help me out without having to refer me to a technical support team!

They gave quick, clear and very helpful instructions that enabled me to overcome the speed issues I was having with their South Africa servers, doubling my connection speeds. All of that was done in less than five minutes flat. 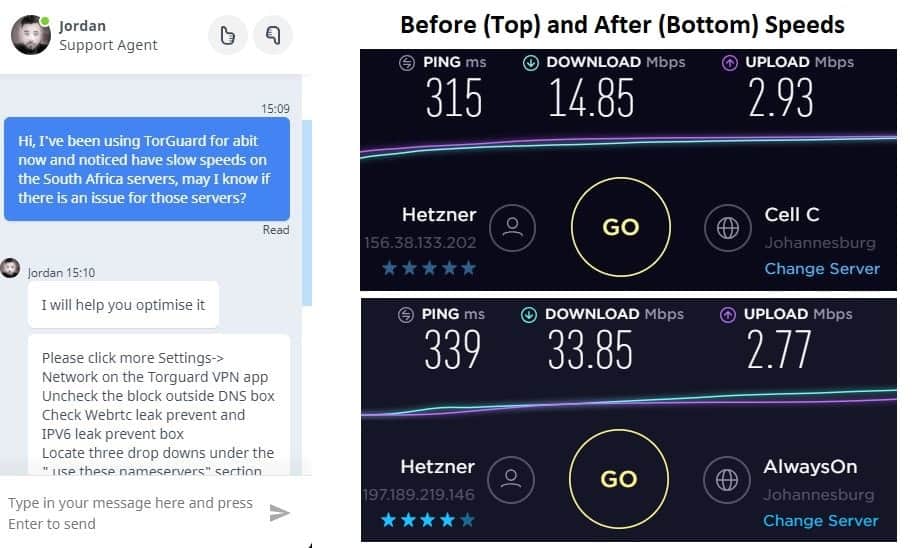 As many people have commented to me before, I am a little bit of a dinosaur in the field of tech. While I admit that is true, I still have (relatively) kept up with the times and know what a simple and decent user interface looks like – and this was not it. 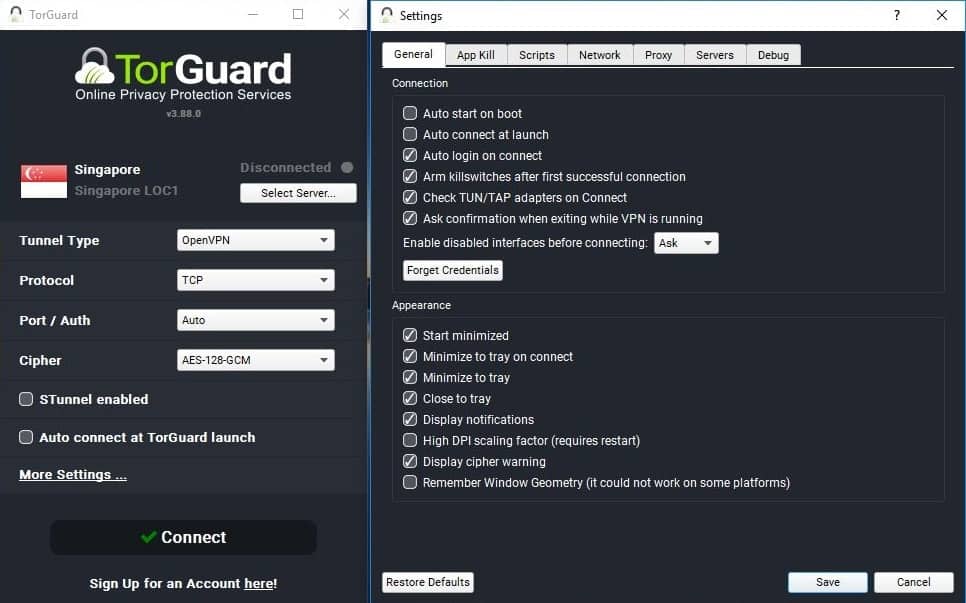 My first impression upon opening the TorGuard windows client was not a good one. I felt as if I were spirited back in time back to the early 2000’s when Windows was in its infancy. Perhaps not that bad, but well, that was what I felt like. 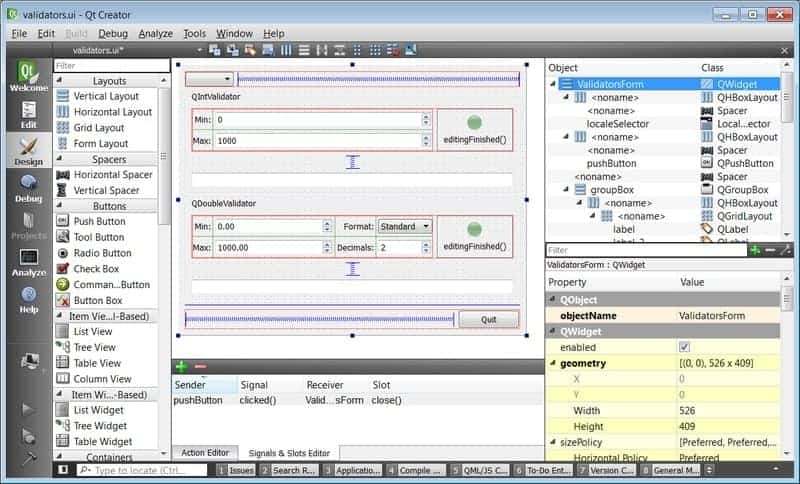 *Feels similar? Perhaps not entirely, but you get the idea (source: Wikipedia)

However, there is a silver lining in this cloud. Upon looking more closely into the interface, I realised that this interface held potential. Most of the ones I had used to date were significantly ‘dumbed down’ so that users could not do too much damage to themselves.

The TorGuard interface offered so many options that someone who knew what they were doing would have an awesome day. At the same time, if you didn’t know what you were doing – just hit connect and it’ll work.

2. May Require Some Technical Knowledge

I was a bit hesitant to list this as a ‘Con’ since to some who have the skills for it, TorGuard offers more options. Yet given that most people out there probably won’t, there it is. If you’re a newbie to VPNs and basic networking and security, TorGuard may seem a little daunting at first.

There are very detailed options available in the Windows application that will simply intimidate some people. If you can just overlook them and simply select your server and hit connect, you’ll be fine.

The Bottomline: Will I Pay for TorGuard VPN?

In terms of speed, stability and potential, I have to say that TorGuard ranks highly on my list of good VPNs. The one thing I was unhappy about was the interface design. If I’m honest with myself, that’s a ridiculous thing to gripe about, but there it is.

I cannot fathom a company sinking tons of money into a fantastic product yet have a look and feel like it was out of the middle ages. It’s annoying and my OCD is hitting me in waves.

What I was most happy about where the swift and stable torrent connections and speeds I obtained. I know the process probably won’t be as smooth and painless for everybody since our configurations vary, but there is that potential.

While their prices are not drop dead cheap, they aren’t what I would call top of the line either. Whether I would pay for it or not remains a coin toss – just because of the interface, but that’s just me.

If you can see past that, then it would be to your benefit and TorGuard is definitely a good choice.