QNAP vs Synology – Which NAS is Better? (6 Aspects Compared)

Buying your first Network Attached Storage (NAS) can be an incredible leap of faith. These devices aren’t exactly cheap, and once you factor in the cost of storage, you’re looking at being out of pocket to the tune of hundreds or even thousands of dollars.

QNAP and Synology are both very recognizable brands in the Network Attached Storage (NAS) space. If you’re caught up in the brand war between various NAS manufacturers and are wondering which to buy, you’ve come to the right place.

QNAP VS Synology: How Do They Compare?

Who are QNAP and Synology? 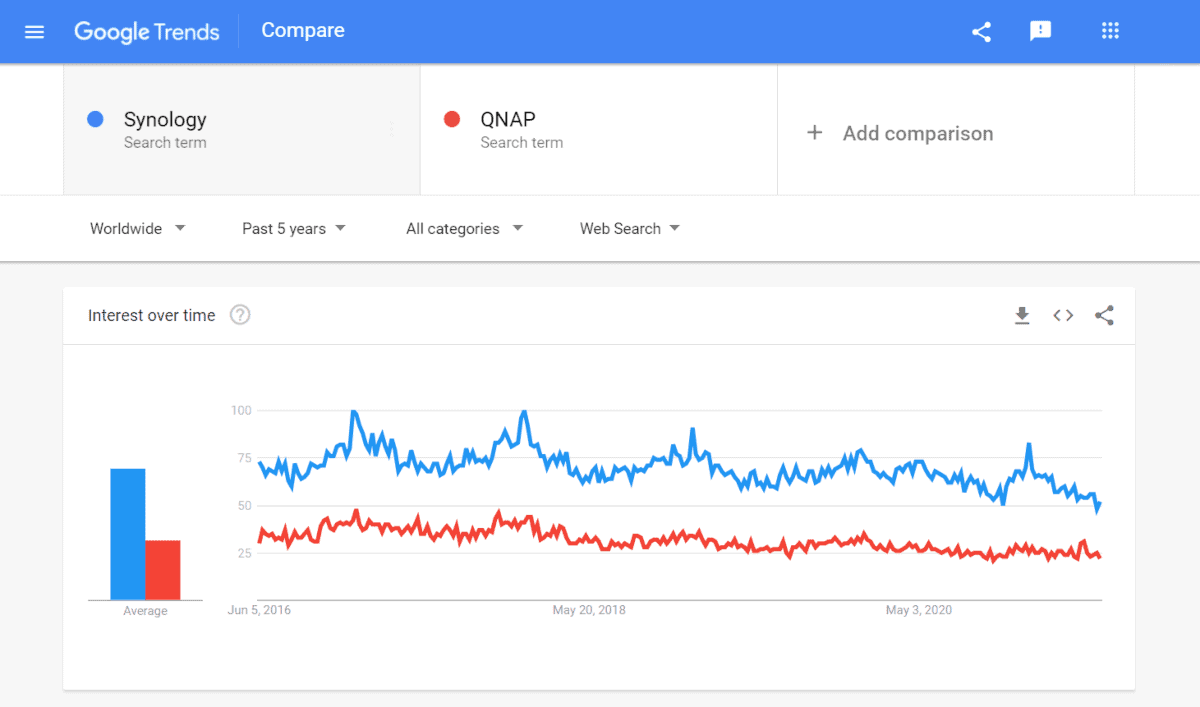 Synology has been of greater user interest for most of the time the 2 brands have been in existence.

It may come as a surprise that both QNAP and Synology are Taiwan-based companies. In the beginning, I was under the impression that Synology was an American company, given the way they foster the brand.

If you’re wondering what the relevance of this is, it came about from Trump’s frequent rants to “Make America Great Again”. If you’re deciding between a Synology and QNAP NAS, you’re still buying a non-American brand.

However, both of these brands have a solid global presence, so the point origin shouldn’t overly concern you. For example, they both have regional headquarters in North America and points of presence dotting from the United Kingdom back to Asia.

While there is scant data on market share for home or small office NAS brands, Synology has been the brand seeing greater interest – at least in Google’s opinion.

The brand we often refer to as QNAP is an acronym for the company name, Quality Network Appliance Provider.

QNAP VS Synology: How Do They Compare?

Now that the background is out of the way, let’s deal with the down and dirty. NAS are, essentially, miniature computers. They all have processors, memory, storage controllers, network interface, and other necessary hardware.

NAS units need to have their own Operating System (OS) to make everything work independently. For example, it enables the NAS to power up on its own, initializes storage devices, manages network traffic, and more. 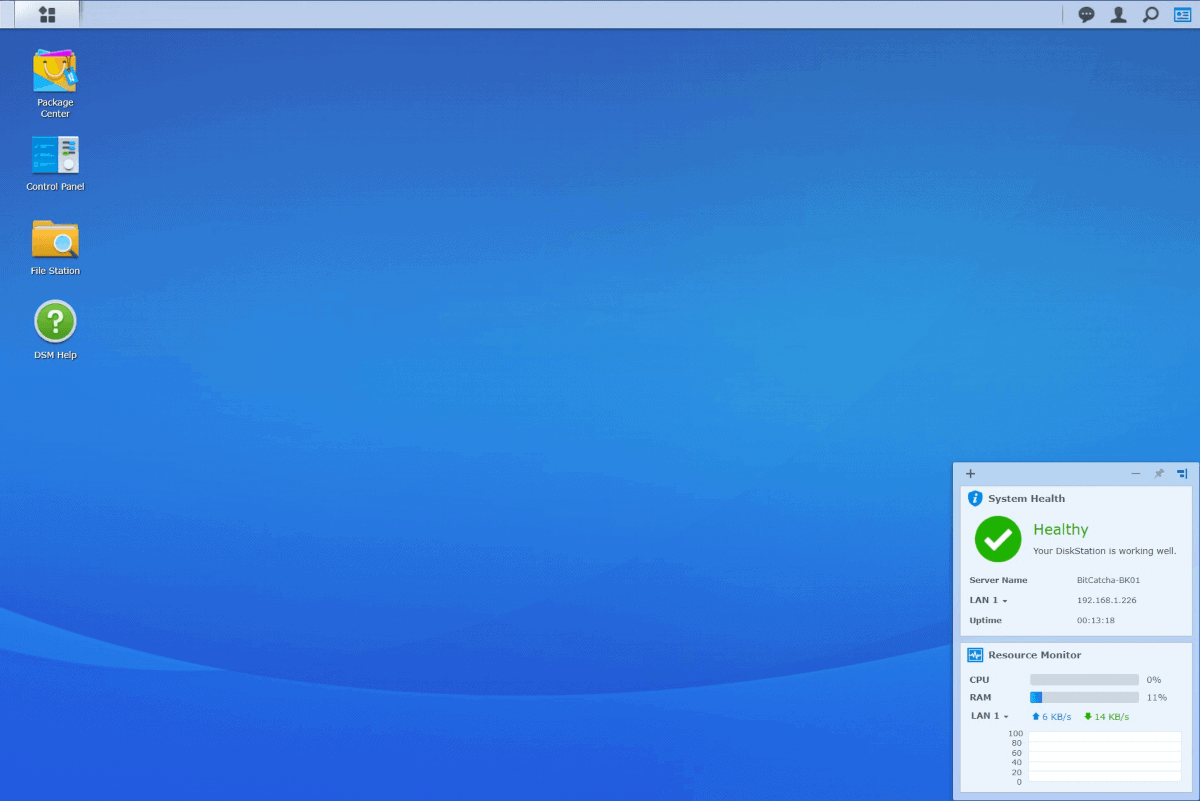 In the case of Synology, the OS used is called DiskStation Manager (DSM), a lightweight Linux-based platform. DSM may look very basic, but it’s very similar to a fully-fledged OS. For those used to Windows, you’ll be pleased to know that using DSM is very similar.

DSM offers more user-friendly network and sharing management features than Microsoft. Not overwhelming, but streamlined while being comprehensive. I encountered no issues setting up a custom network configuration with the Synology DS718+ I used as a sample.

It also includes a package manager (Linux style) that allows you to choose from a list of approved applications to install. Some are directly from Synology, but there are also many from approved third parties.

I managed to find most of the applications that came to mind easily – antivirus tool, media servers, plus file download utilities.

QNAP’s QTS OS is also Linux-based, but design-wise seems to go for more of a mobile OS outlook combined with some Mac OS design elements. I find QTS to be more comprehensive than DSM. Unfortunately, this advantage means it can be more challenging for NAS newbies to manage.

The terminology that QTS uses is also rather technical. If you want to manage your NAS using this OS, be prepared to dive into some basic networking to pick up the necessary skills. It’s a unique blend of the ordinary and advanced, so it can be quite an experience.

Application-wise, QTS also offers an acceptable range but is curiously missing some options. For example, I’d very much have liked to see a VPN option or, at the very least, some better digital security tools.

I prefer the simplified layout of Synology DSM and the ease with which you can do almost anything. It isn’t overwhelmingly easy to handle, but for the inexperienced, QTS can quickly overwhelm. Rest assured that both offer quick configuration guides for the uninitiated.

Although QTS offers some decent applications, I feel that DSM has a much better spread. At the very least, I found some core utilities that should be critical missing from QTS, such as an antivirus solution.

Although I covered applications very generically above, let’s get down to business. Most of us use NAS for backups, with some using them for media playback or even running Virtual Machines (VM).

I run many things on the Synology DS719+ sitting on my desk, including Plex and even a VPN service. Here’s where we find out if these essential services are better on Synology or QNAP.

Synology has a good spread of very high quality native applications and good support for many other popular third-party apps. I feel it has a more distinct advantage here over QNAP. 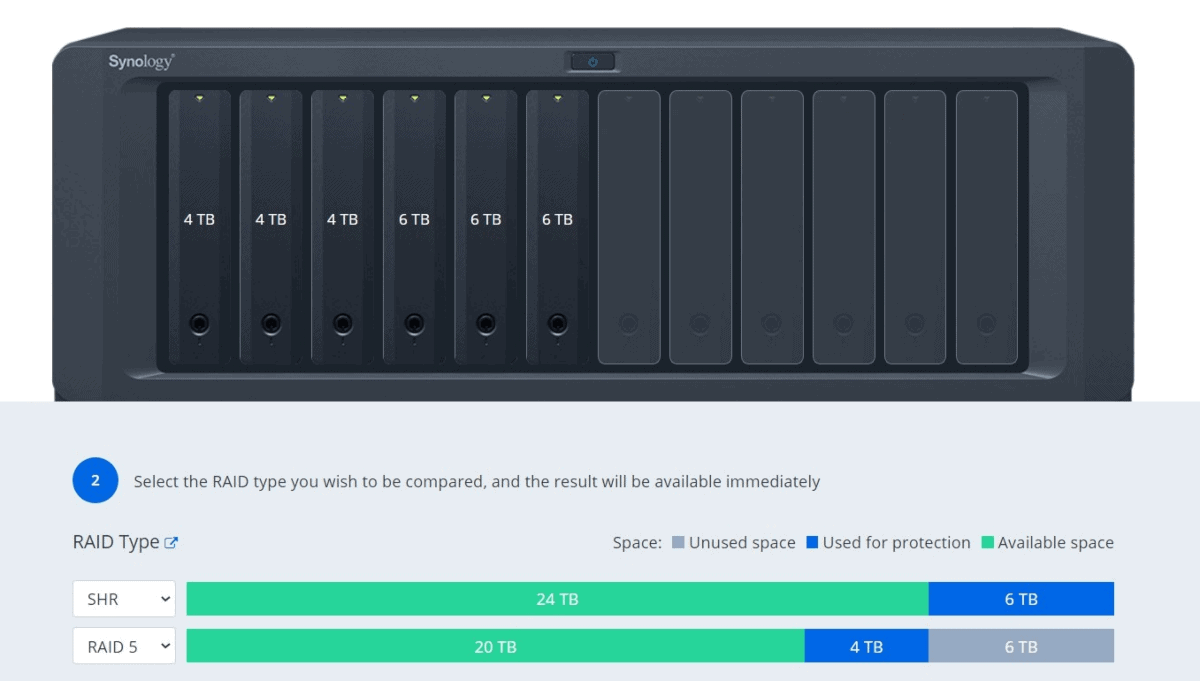 One primary reason why we use NAS over DAS is for greater reliability. Aside from the use of NAS-specific storage drives, another contributing factor is the Redundant Array of Inexpensive Disks (RAID) capability.

RAID introduces algorithms to use multiple storage drives for redundancy, thereby protecting against hardware failure. For example, when using RAID 5, you need at least 3 storage drives, one of which will be used to store parity information for data recovery if one drive fails.

There are many standard and proprietary RAID models available, which you can choose from depending on your needs.

SHR is similar to RAID 5 but works with as few as 2 storage drives. RAID 5 requires the use of at least 3 drives to work. Aside from that, they are mostly similar, with a single drive acting as the parity storage device.

RAID F1 came about with the dropping price of flash storage, and you should use it with arrays of flash storage devices. Aside from redundancy, an element of striping also helps increase the read performance for the NAS.

Synology supports EXT4, which is the file system used by Linux platforms around the world. It also supports the Btrfs file system, which offers a few notable advantages. At the very least, Btrfs adds checksums for data blocks resulting in better data corruption reporting.

QNAP also supports most traditional RAID formats, including a few that Synology does not. Triple Parity (TP) and Triple Mirror (TM) are both used in NAS systems that require a very high degree of data integrity.

TM, for example, stores data in 3 identical copies across triple drive arrays. It offers formidable redundancy while increasing performance. The downside, of course, is that you only get access to one-third of the total capacity for the 3 drives.

QNAP maintains the use of only the EXT4 file system across its range of NAS units. While this may not be as interesting as Btrfs, it is a very mature file system. You can essentially strip an EXT4 drive out of the NAS and plug it into a Linux desktop to read the contents.

Synology’s SHR technology is fantastic for most home or small office scenarios. It offers a strong balance of redundancy and agility to make things most economical for this category of users. TP and TM offer better integrity but comes at a massive cost increase for storage.

For file systems, opt for EXT4 if you intend to move your storage drives to different devices – it is mature and very generic for Linux. For users who intend to retain NAS ecosystem integrity, Btrfs introduces much better features. 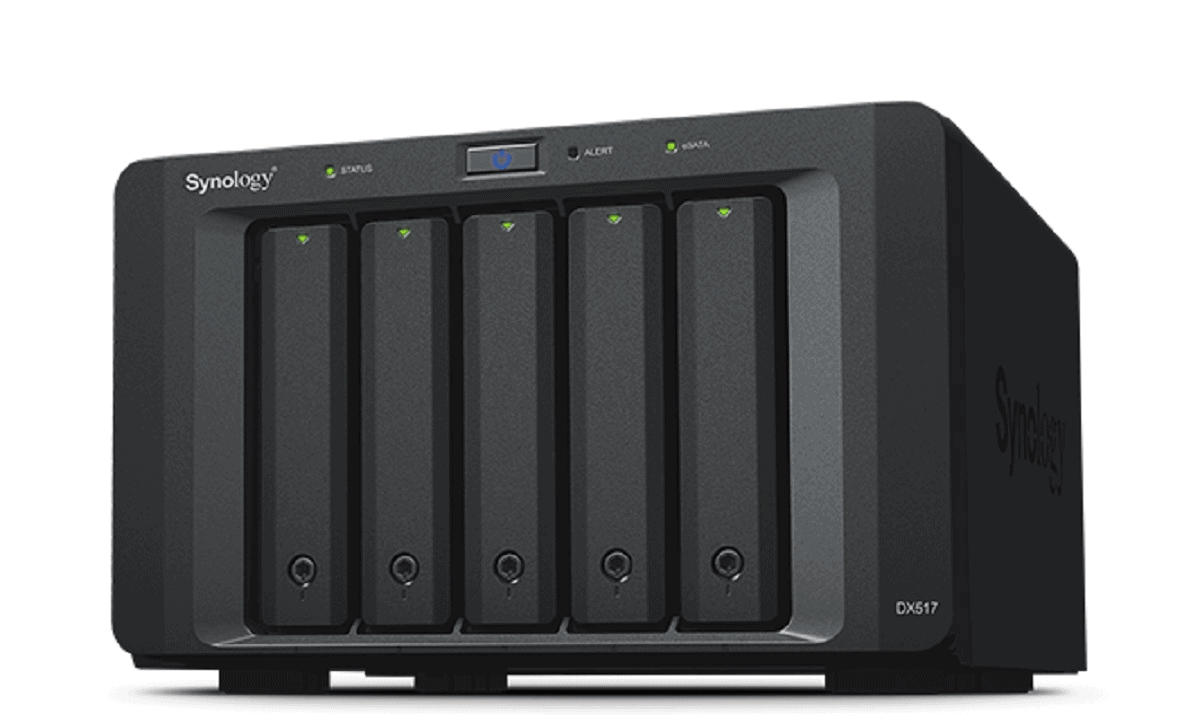 The Synology DX517 is a quick way to increase storage without having to chuck out older drives.

One of the things you may have noticed about NAS devices is that they come with specific drive capacities. For home or small office users, the typical capacity would be between 2 – 4 drive bays. What happens if you need more space?

Unless you look forward to chucking your existing drives away and buying larger capacities, then Synology has the edge here. They offer 2 expansion units (the DX517 and DX1215) compatible with their standard home or small office NAS devices. These can quickly beef up your storage drive capacity by an extra 5 to 12 drive bays.

While QNAP also offers expansion units, these are for the enterprise market. They won’t work for home or small office use – unless you plan to install some server racks.

If expanding storage is something you need to consider, Synology wins this segment hands down. It’s also better for future-proofing since replacing the main NAS unit could ultimately be a lot cheaper. 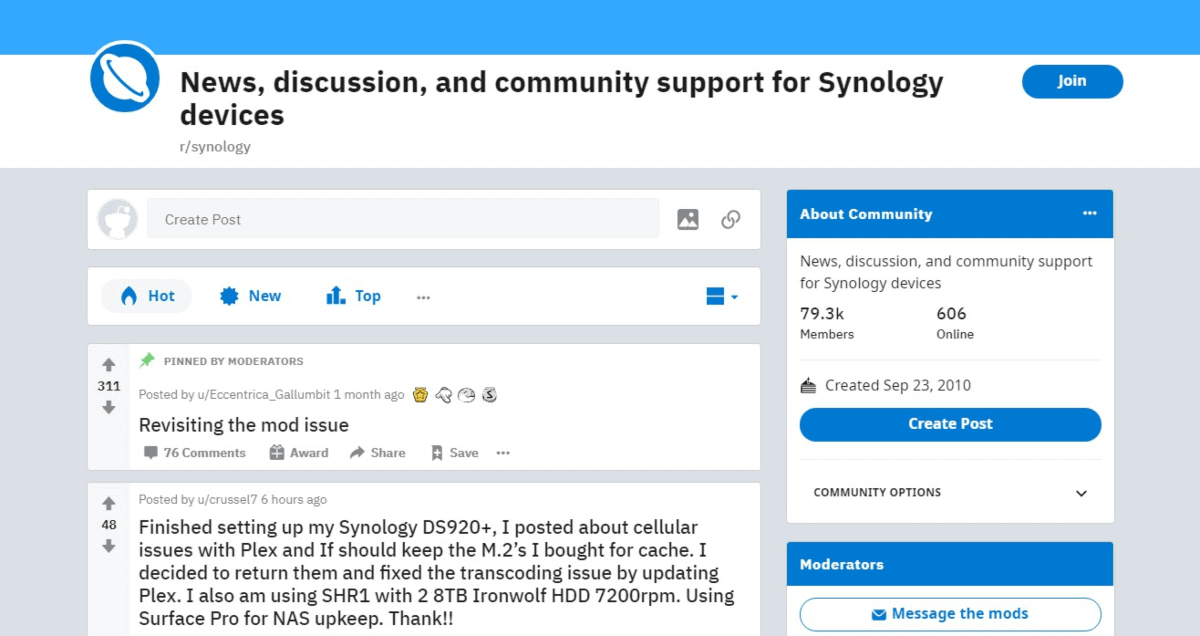 Synology has a very active user community in many digital locations.

Earlier I mentioned that Synology and QNAP both have global points of presence. That means support is just around the corner if you need help. They both offer streamlined channels for assistance, including tutorials, a service portal, and direct customer assistance phone lines.

One area with some discrepancy, though, is the user community. Synology has a more active user base with many third-party forums supporting conversation. In the r/synology Reddit channel alone, the number of members dwarfs r/qnap by 79.3k to 15k.

While both companies offer decent direct support, strong NAS communities are like solid gold. You can do so many things with a NAS and the ability to find help for strange or unsupported features is invaluable.

The best part of choosing a NAS brand that doesn’t have its range of hard disk drives (HDDs) is that it won’t limit you to specific brands or models. It is to their benefit to make their devices as widely compatible as possible.

In the beginning, both Synology and QNAP did this, but things have changed a bit. Synology now produces a range of Synology-branded HDDs and even NVME solid-state drives. It has also announced intentions to limit the HDD models you can install on their range of enterprise NAS.

If this were something cutting-edge and designed to outperform anything in the market, that would be great. However, all Synology has done is to rebrand Toshiba drives and slap on new firmware (presumably for their NAS units to recognize and accept them).

While this isn’t a current concern for home or small office users, the trend is disturbing. Being locked into a particular vendor means opening liability to price monopolies and other negatives associated with proprietary technology (like what Sony tried to do with their Memory Stick).

Before you purchase your HDDs, though, it’s always better to check the compatibility list from each vendor.

For the time being, both brands are highly compatible with a wide range of popular drives, including the Western Digital Red NAS drives and the legendary Seagate IronWolf range. Longer-term, the outlook is slightly bleak for Synology users.

Verdict: Synology has the edge over QNAP

Both Synology and QNAP offer a wide range of NAS devices but that’s mainly in terms of technical specifications.

The OS is a major influencer and Synology DSM offers a more streamlined experience while retaining strong features. The brand also has better potential for upgrading thanks to device extensibility.

If there’s a single point out of Synology’s favor, it would be the possibility of being locked in to Synology brand drives in the future. But as of now, that only applies to their enterprise range of products.

Lastly, I’ve also previously reviewed the most popular NAS devices on the market. If you’re shopping around for a NAS device, here’s a glance at the top 5 NAS I’d recommend.

* Prices were correct at time of writing. Click on our product links to view current prices.

Unsurprisingly, Synology takes the top 3 spots, with QNAP coming up 4th. Generally speaking, you can’t go wrong with any of these, but I recommend you pick the one that best suits your needs. Feel free to check my full comparison of the best NAS for home users.