What Is VPN Split Tunneling? (A Beginner’s Guide)

If you’re trying to stay safe online, a Virtual Private Network (VPN) is the best place to start.

That said, they aren’t totally foolproof and you can often run into issues when trying to do certain tasks with a VPN enabled.

For instance, while your VPN allows you to encrypt data, you might find that your internet connection slows down during the process. There are also times when you might even have a hard time accessing local network devices such as your local printer.

Luckily, many of these issues can be solved through VPN split tunneling. So, here’s everything you need to know about it.

What is VPN Split Tunneling?

Split tunneling, as the name suggests, is a software concept that “splits” your internet connection into two. With this, your VPN service provider can create two connections that you can use online.

The first connection lets you encrypt all of your data using a protected VPN tunnel, and the second would let you access the internet. 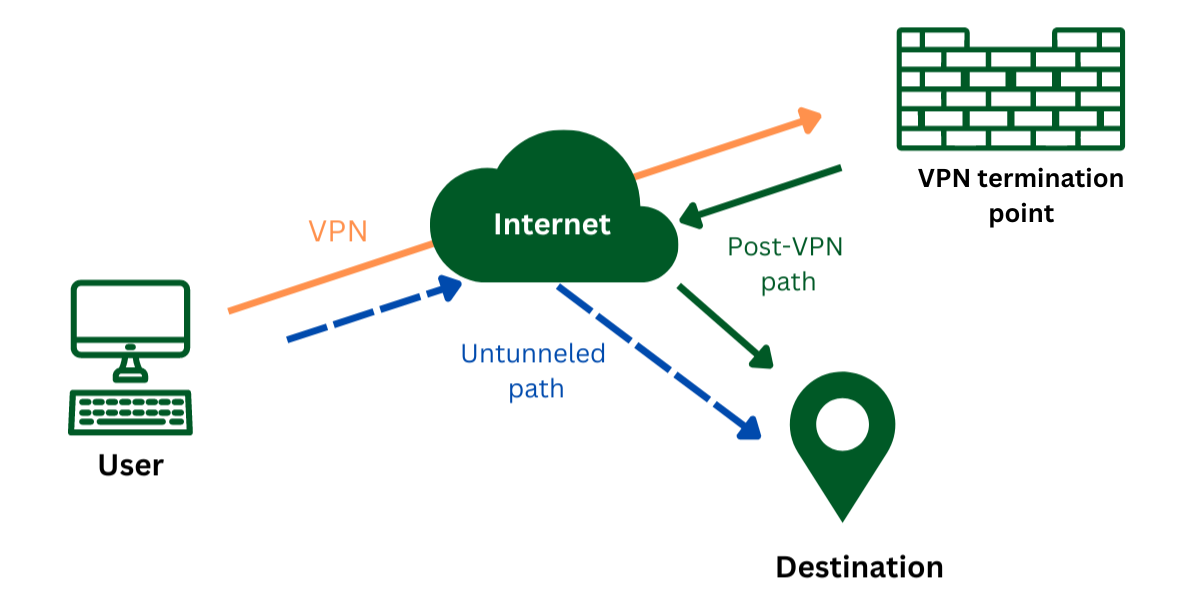 VPN split tunneling allows you to secure and encrypt your internet traffic.

By default, VPNs would secure and encrypt all of your online data and activity, shielding you from those interested in your sensitive information. Because of this, split tunneling is offered by most of the best VPNs out there.

It’s helpful because you get to choose what sites, applications, and networks you’d want to run through your VPN, and the ones you can access directly.

To use Wikipedia as an example, some encyclopedias don’t allow editors to make changes to some pages while a VPN is in use. So if you needed to edit a page, you’d need to add the site to your VPN split tunneling list.

VPN split tunneling can be used in several ways, and come in a range of different forms.

Here are some of the different types of VPN split tunneling:

What Are The Benefits of VPN Split Tunneling? 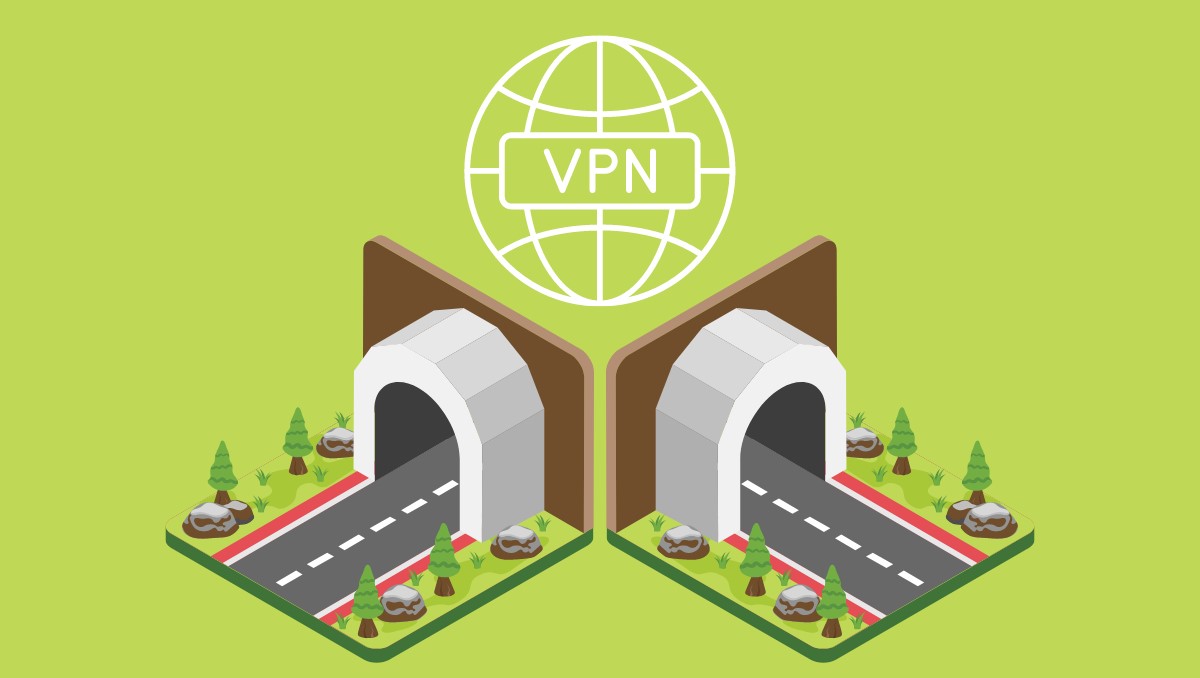 There are lots of reasons to use split tunneling.

There are plenty of reasons why split tunneling can come in handy.

Are There Any Security Risks To VPN Split Tunneling?

Whilst split tunneling has plenty of benefits in many situations, there are a couple of possible downsides to be aware of:

When Should You Use Split Tunneling?

The main reason why you’d want to use split tunneling is that you want to protect your sensitive data without sacrificing your internet speed. This feature is a great option for you if you’re happy about dividing your online activity into things you want to keep private and things you’re not worried about.

The following are some examples of when you should use split tunneling:

How Do I Use Split Tunneling?

If you’re new to VPN split tunneling, it can be intimidating especially if you only know about the basic VPN features. However, it’s really easy to enable.

The following is a step-by-step guide on how to do it:

Step 1: Open your VPN on your device.

Step 2: Go to the Settings, Options, or Preferences menu of your VPN. 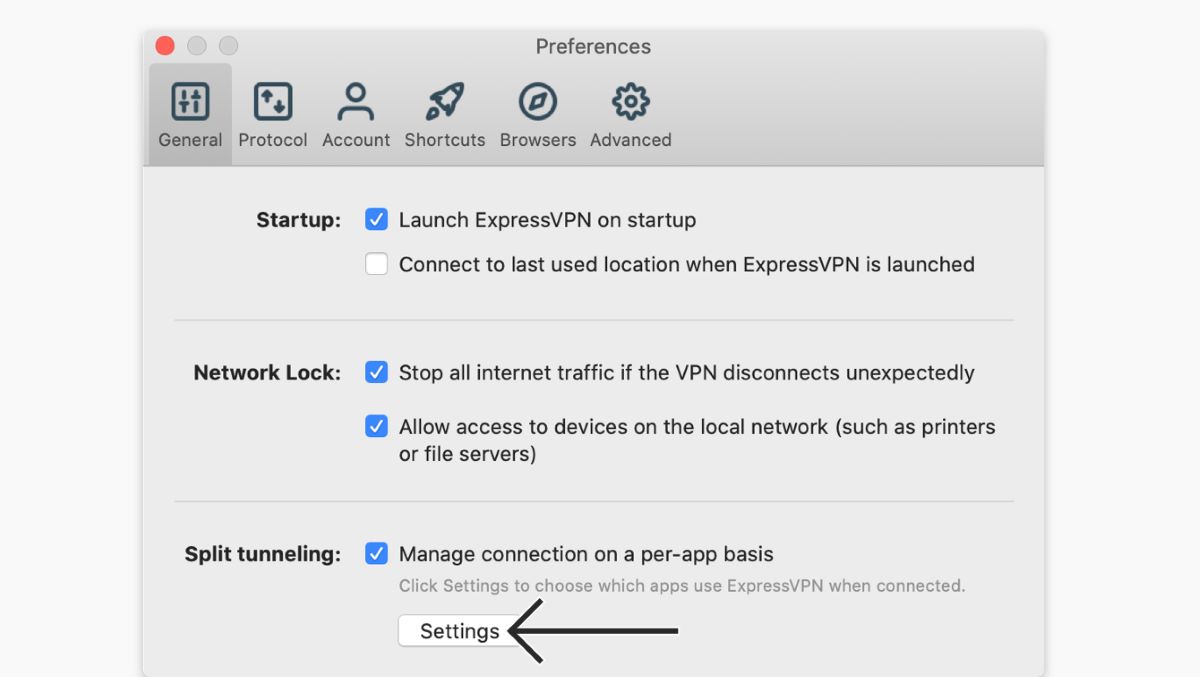 You can find split tunneling in the options menu of your VPN. (Source: ExpressVPN)

Step 3: Inside the settings, you should find the option to manage your VPN on a per-app or per-URL basis.

Step 4: Now all you have to do is choose the apps you want that’ll use the VPN and which will be used by the open network.

You can find that a lot of the top VPNs support split tunneling. Here are a few of them:

split tunneling is not available on Mac OS 11 and above (Big Sur).

Their split tunneling is also known as the whitelister. It’s really easy to use and works on a per-URL and per-app basis. What this means is that you can easily add different apps and websites to your split tunneling. While this sounds great and all, Surfshark is unfortunately only available for Windows and Android.

What’s great about these VPNs is that they have implemented VPN no-log policies. What this means is that you don’t have to worry about them storing any of your browsing history or activity while using their service.

Split Tunneling: Now You Can Utilize This Useful Feature

VPN split tunneling is a great way to keep your sensitive information secure without needing to sacrifice your internet speed. But then again, because not all of your activity is protected, this feature makes you vulnerable to a third party.

So if your main concern is security, then you should just probably use your VPN for all your internet traffic.

However, if you’re not planning to encrypt ALL your data and you just want additional security without slowing your internet speed, then split tunneling is definitely worth a try.

With that being said, you can also learn more about the best VPN protocols to use with your VPN.

How Much Disk Space Do You Need From Your Web Host?

VPN Kill Switch: What Is It and How Does It Work?