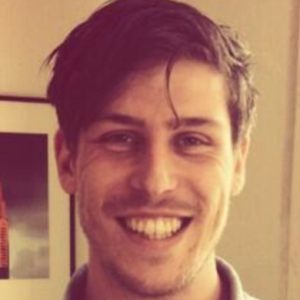 A while back, I set myself a little challenge.

It had to be a completely new account, starting from zero. It was unaffiliated to any existing website, and I didn’t use my existing network. Just a pure experiment from scratch.

Don’t ask me why I started this. It was simply curiosity, and I wanted to learn what makes Twitter tick. And I learnt a lot.

It’s not just about the numbers…

Of course, Twitter followers on their own mean nothing. So a key part of my little challenge was engagement.

The average Twitter engagement at the time of this experiment was 0.7%. I had to make sure I was above this.

Guess what I got? 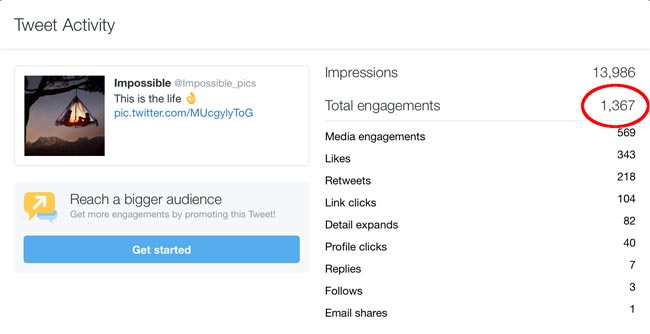 When I started, I didn’t really have a strategy. It took a few weeks to get going. But after that, a clear and effective routine started to take shape. I’m no expert! But here’s how it worked.

First of all, you’ve got to know how Twitter works. I’ve spent a few years on the platform with a personal account. Much of that time was spent watching from the sidelines.

I noticed that Twitter is great for three things:

So I knew I had to choose something that fitted at least two of those three things.

I chose adventure/action sports which easily slipped into both ‘news’ and ‘light-hearted relief’. 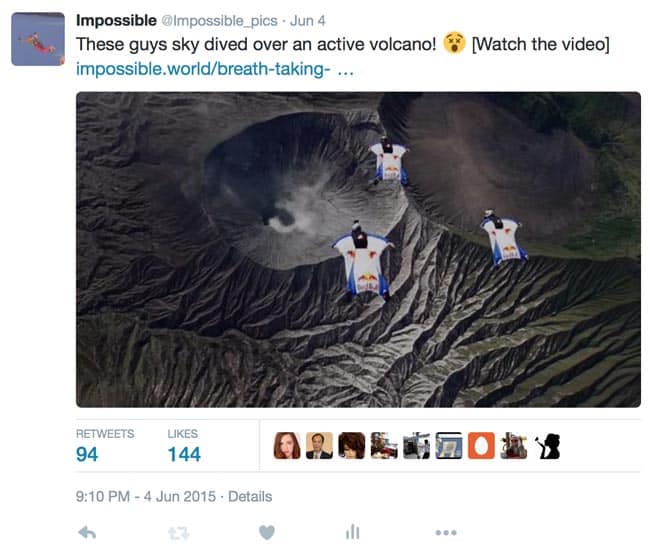 I also knew there was an open hole for this type of thing. There are the big giants like Red Bull. But in terms of small competition, it’s surprisingly slim pickings.

Twitter growth is simple when you think about it.

You don’t need to make it any more complicated than that. That means your number one priority is to post cool stuff!

Social Media Examiner explains that you’ll get 150% more retweets if you post an image. So I decided that every tweet must have an image attached.

Make sure every single tweet has value. Make it an interesting photograph, a useful piece of data, or a link to something valuable. If it’s not worth saying, don’t say it.

You can also boost engagement by asking questions, keeping your tweets short, and actively asking for retweets.

There’s a weird myth that high-volume tweeting produces a better engagement rate. It’s just wrong. (Again, Social Media Examiner will back me up). Tweeting too much drowns out the important things you’re saying. And it dilutes your content. It might annoy people too. 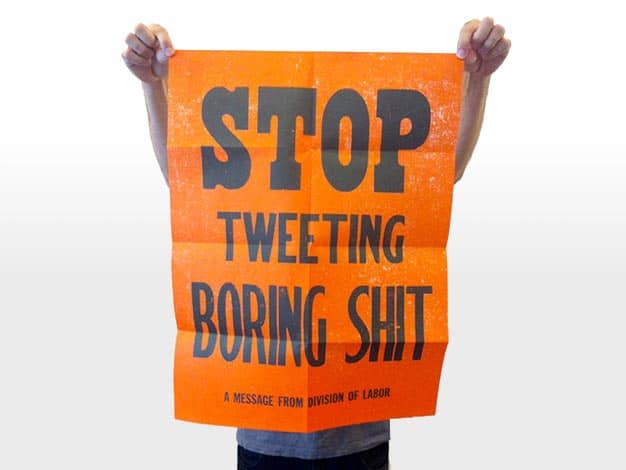 I stuck to one-two tweets a day. That’s all I needed. In total, I only sent 52 tweets in those three months. You can try a few more, but keep it to a minimum. Don’t overwhelm your audience, and don’t drown your content.

Okay, so far I’ve taught you what to post. But how do you get those first followers?

I found this super tricky too. In fact, the first 100 followers are the hardest you’ll ever get. It took me a little while to figure out the secret, but it’s really easy.

Make a list of Twitter accounts that have a target audience that you want, and save them to your ‘lists’.

For me, this was action sports mags, outdoor clothing companies etc. I’m sure you can pick plenty of accounts from your own chosen niche.

Now, load up the last few tweets from those accounts. Then follow anyone who favorited, retweeted, or commented on it. These are the most active and engaging followers, and you want them!

Don’t go crazy here. If you follow more than 100 people in a day, Twitter starts to get suspicious. Any more than this, and you’re just spamming people. You can (and will) be suspended from Twitter if you go too far.

5. Spend 15 minutes doing this every day

Building a Twitter following is a daily activity. You’ve got to be quite relentless about this. Schedule 15 minutes a day to post something cool. Then spend some time following people in your niche.

I did this every day for three months, and I ended up following around 8,000 people. About 40% followed back, and the remaining 7,000 came from retweets and organic growth.

If you think this is a waste of time, just remember that marketing expert Neil Patel took the time to follow 100,000 people when he joined the Twitter platform. And no-one would accuse him of wasting precious marketing time!

Twitter isn’t just a one-way street. If you don’t join in the conversation, you’re just shouting at the universe. Twitter is a conversation. Get involved.

Retweet useful information that you saw on someone’s timeline. Write a little comment, or just favorite their tweet. Don’t be that guy who just blasts out tweets without response.

For example, Bitcatcha’s social media manager Ee Vonne uses our Twitter account to hang out with other freelancers or business owners, and retweet cool things they’re up to. When someone interacts with us, we sometimes even run their website through our speed checker and let them know how it’s doing!

Add value to the community, guys. Share the love.

I didn’t have this luxury, but it will be a good way for you to get a few hundred followers quickly. (I did end up building a rudimentary website, to experiment with posting linked content on Twitter. But it wasn’t a factor in my 10k.)

Put your Twitter link in your email signature to capture all your colleagues. That’s an easy way to build your network. Then use Twitter’s API to put a ‘follow’ button on your website. Simple. Easy. Effective.

One thing I did wrong…

… Was failing to set out without a broader strategy.

Since this was just an experiment, I didn’t have a bigger plan.

You need to figure out how your Twitter presence fits into your overall business model. Do you want to drive more sales or web traffic? Do you want to build awareness or tap into a particularly lucrative market?

That’s one thing I didn’t do, and now I’ll have to work backwards to figure out how to use this resource.

Try it yourself, folks…

Ben is a copywriter and editor from London. His work regularly appears in The Huffington Post, and he has worked on several successful copywriting campaigns for Sony UK. Feel free to connect with Ben via Twitter.

How to Create a Content Marketing Plan for Your Fashion Brand