How To Watch Pretty Little Liars Online – Stream All 7 Seasons From Anywhere!

You can watch Pretty Little Liars on HBO Max, Netflix, Hulu, Amazon Prime, iTunes, Google Play, and Vudu. However, geoblocking may prevent you from watching the series, depending on your geographic location. You may need a VPN.

Pretty Little Liars is a thrilling teen drama based on the mystery novel by Sara Shepard. The series follows a group of four best friends escaping a mysterious stalker who’s trying to figure out what happened in their past.

If you haven’t watched this addictive series, then you’re missing out! Luckily, we got you covered. Here’s everything you need to know about where to watch Pretty Little Liars, from anywhere in the world.

Where to Watch Pretty Little Liars in the US

Tons of streaming services let you watch Pretty Little Liars. Here are a few different options if you’re trying to tune in from somewhere in the US.

Where to Watch Pretty Little Liars From Outside The US

Whilst there are plenty of streaming platforms that allow you to watch Pretty Little Liars, this all changes when you try to watch it outside the US. Depending on your region, you may only be able to access a select few of these streaming platforms.

For example, if you tried to watch the series on Netflix, you’d find that it’s only available in Netflix Canada and Netflix UK. Luckily, by using a VPN, you can get around this problem. By connecting up to a server in other country, you’ll be able to change your Netflix region and unlock a wider world of shows! More on this below.

How to Watch Pretty Little Liars With a VPN – The Details

Geoblocking is the practice of restricting access to particular websites, media or services based on where you are in the world. The practice is common in many countries but has also been adopted by local businesses and internet providers who block or charge higher rates in order to attract visitors from other countries.

This can be very annoying if you want to watch Pretty Little Liars when it’s not available on your preferred streaming platform.

That’s why you’ll need a VPN. Here’s a quick start guide on getting started with one:

VPNs are a very useful tool for accessing content that you normally couldn’t. But as you browse the thousands of VPN service providers out there, you might find it overwhelming and difficult to find the one that you want and need.

When choosing a brand, it’s important that you not only choose the one that lets you access content, but you must also consider speed, privacy, and safety.

With great speeds, you can have a smooth streaming experience, without any buffers or delays. On top of this, a great VPN would keep you safe from those trying to steal your information. Below are our top picks for VPNs for watching Pretty Little Liars.

Our top 1 pick is ExpressVPN.

ExpressVPN is our top pick here – they have you covered in everything from speed, safety, reliability, and as well a user-friendly interface. They offer unlimited bandwidth and can bypass geoblocking on almost any streaming platform. Plus, you’ll have access to servers in Canada, the US and the UK – which is where most Pretty Little Liars content can be found.

For more info, check out our ExpressVPN review. You’ll find that it’s also on the top of our list as the best VPN for Roku.

Another great VPN that you can use with multiple devices.

For the price you pay, Surfshark is great value. They offer strong security features but also great servers at fast and reliable connection speeds.

Just like ExpressVPN, Surfshark is able to bypass region restrictions in almost any streaming platform. With more than 3200 servers in 100 countries, you can access Pretty Little Liars no matter where you are in the world. What more is that you’ll also be able to unlock different streaming platforms with this VPN such as Amazon Prime, HBO Max, and many others. For more info, check out our Surfshark review.

Pretty Little Liars has a lot of episodes and seasons and fans around the world are looking for more. Unfortunately, this beloved series has already ended back in 2016. There have been a total of 7 seasons and a total of 160 seasons over the course of 6 years.

However, you may find that another series titled “Pretty Little Liars: Original Sin” premiered back on July 28, 2022. The series is still ongoing so those looking for more are lucky to find that there’s more to look forward to!

What is Pretty Little Liars All About 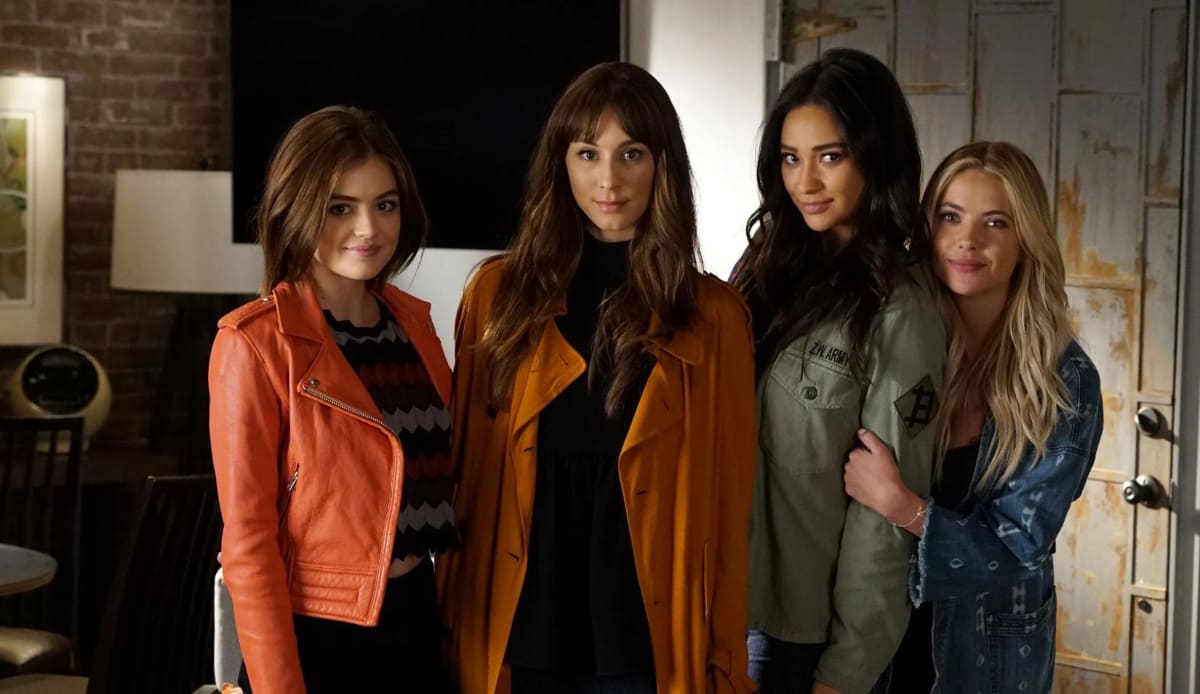 4 out of 5 of the group of friends from Pretty Little Liars. (Credit: Teen Vogue)

Based on the novel by Sara Shepard, Pretty Little Liars follows the lives of five friends who discover that their popular classmate has been keeping a dark secret all along. In this mysterious series, you would find that these five girls would rule the halls of Rosewood High.

However, one night, things take a turn for the worse as their leader, Alison DiLaurentis, goes missing. A year passes by after her disappearance and the estranged friends reunite, while still not knowing what happened to their best friend.

This series is loved by fans from all over the world. Despite the show ending in 2016, people still love this series and are still looking for more. The series even has a hilarious fanbase and have been making tweets about the show ever since the show came out. 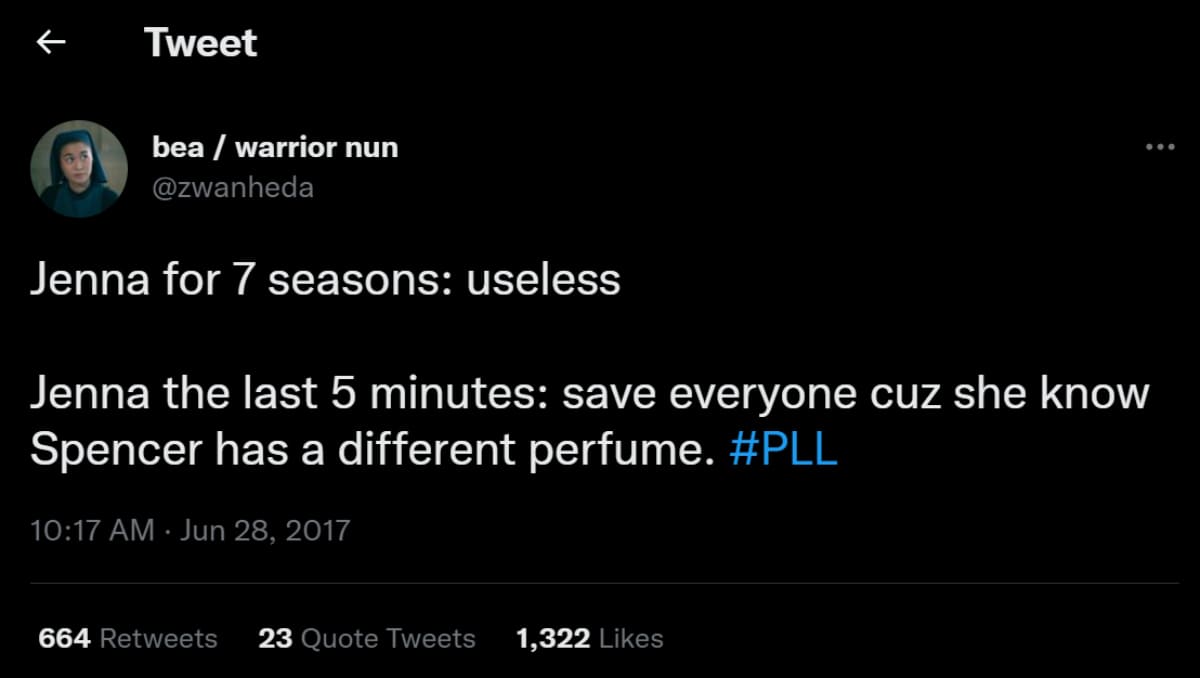 One of the few fans who made hilarious tweets about the series. (Credit: Twitter)

Pretty Little Liars was also given great reviews. It was given an 81% on Rotten Tomatoes and was given 7.4/10 on IMDb. Pretty high reviews for a show that lasted for 6 years!

Watch the Friends Uncover the Mystery

Now that you know where to watch all seasons and episodes of Pretty Little Liars, you can start binge-watching it on your selected streaming platform!

While geoblocking prevents you from watching the series anywhere around the world, a VPN is just a few clicks away. However, it’s important that you choose the right one for the best viewing experience. Have fun unraveling the mystery!

What Is A Database? (And How Does It Relate to Web Hosting?)

What Is a TLD? Top-Level Domains Explained for Beginners